Is California the Most Litigious State in the United States?

Although many people view California as the most litigious state in the United States, it is actually the sixth most litigious, according to the Employment Opportunity Commission (EEOC).

Summer Dress Code For The Workplace

Summer is in full effect and it’s been hot and muggy in So Cal. Another heat wave is on the horizon this week. We spend our summer weekends at the pool and the beach and when it’s 90+ degrees outside, the last thing we want to do is slip into our wool suits or heavy dress clothing when we go to work. As an employer, how do you treat the dress code standards at your workplace? Do you have a dress code?

Click here to read the California Chamber of Commerce Human Resources Department’s thoughts on the subject that employers should consider – especially during these hot summer days.

Why Employment Practices Liability Insurance Coverage Is So Important

Quite honestly, I am floored by how many small businesses do not purchase Employment Practices Liability Insurance (EPLI). For those who are unaware, Employment Practices Liability is coverage against claims by employees alleging that they suffered damages as a result of the employer’s discrimination, wrongful termination, sexual harassment, or various other employment-related offenses. 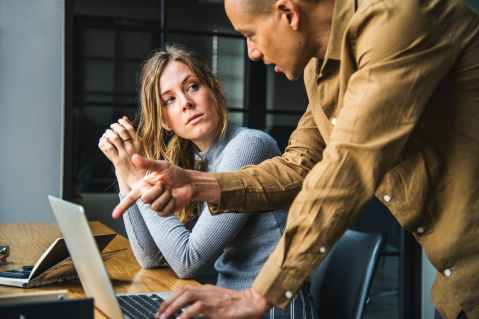 Photo by rawpixel.com on Pexels.com

When saying I am floored by how many small businesses do not purchase EPLI, I am basing that off my own experience in helping businesses with their various risk exposures and insurance needs.

I understand there’s a price tag associated with the coverage, but there’s a reason why premiums can be hefty in California for EPLI.  Statistics show businesses are more likely to face an employment claim than a property or general liability claim.

Check out these statistics:

Also, when buying EPLI, you have 24/7 access to Human Resource professionals and Employment Law attorneys to consult with if you need guidance on how to address an employment issue. Carriers don’t want to pay claims, so this offering is pushed on their part to help mitigate the potential of a more serious matter.

In my opinion, Employment Practices Liability Insurance is a must for any business with employees in California. The annual premium cost will seem like pennies on the dollar compared to the cost of a claim. Don’t believe me? Take a second look at the statistics above. You should act today before it’s too late. You can’t buy a policy for an Employment Practices claim or incident that already happened.

The FY 2017 data show that retaliation was the most frequently filed charge filed with the agency, followed by race and disability. The agency also received 6,696 sexual harassment charges and obtained $46.3 million in monetary benefits for victims of sexual harassment.

These percentages add up to more than 100 because some charges allege multiple bases.

EEOC legal staff filed 184 merits lawsuits alleging discrimination in fiscal year 2017. The lawsuits filed by the EEOC included 124 individual suits and 30 suits involving multiple victims or discriminatory policies and 30 systemic discrimination cases. At the end of the fiscal year, the EEOC had 242 cases on its active docket. The EEOC achieved a successful outcome in 90.8 percent of all suit resolutions.

My question to you, do you have Employment Practices Liability Insurance for your business?

California has become the latest state to outlaw the ‘previous salary’ question.

California joins Delaware, Massachusetts, Oregon, and several cities (including San Francisco) in passing laws preventing employers from asking prospective workers for their salary history. If asked, companies must also provide a pay range for the job in question. The new law, which comes into effect January 1, aims to curb the gender pay gap by keeping low salaries from following women through their careers.

Saw this sign driving around L.A. yesterday. Employers beware. Your employees are exposed to this type of marketing from attorneys. First and foremost, treat your employees with the respect they deserve. Build a strong culture of trust and put your employees first. However, what if you do your best but still get a bad seed filing a groundless wrongful termination or discrimination claim against you? Do you have the money and resources to defend it? 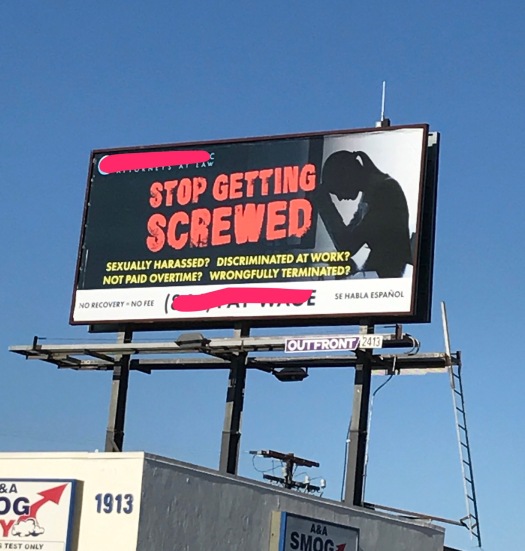 They say nationally, the cost of settling an Employment Practices Liability #EPL claim out of court averages $75,000, and the average jury award hits $217,000 if you go to court and lose. In CA, I’m sure it’s higher. Are you prepared? #EmploymentPracticesLiability

One of the most challenging aspects of owning a small business (particularly in California) is knowing and following legal requirements regarding hiring, managing, and sometimes terminating employees. It seems like there are new laws drafted daily. How can one possibly stay on top of it all???

This new dedicated EEOC Resource Center contains a general overview of small business obligations including the posting and record-keeping requirements to assist in staying compliant with the myriad of nondiscriminatory laws.

The website also has available FAQs, tips, fact sheets and videos, as well as no-cost outreach programs. This is a good resource to keep in mind when you need to make sure how you are treating employees is legal.

I wouldn’t recommend that you try to do it all on your own though. Use a professional Human Resources consultant or attorney when necessary when dealing with sensitive matters surrounding the employment process.

Need help finding a reputable Human Resources consultant or attorney  to help with your business? Contact me today. I have relationships with some great ones who can help you out.

With that being said, here are 10 EEOC (Equal Employment Opportunity Commission) Tips for Small Businesses taken directly from the EEOC. The Equal Employment Opportunity Commission is an independent federal agency created by Congress in 1964 to eradicate discrimination in employment. The Commission enforces various statutes that prohibit employment discrimination on the basis of race, color, sex, national origin, religion, retaliation, age, and disability or protected veteran status.

The EEOC has the authority to investigate charges of discrimination filed against employers who have a statutory minimum number of employees. HR can help avoid costly penalties by following the tips published by the EEOC.

The U.S. Equal Employment Opportunity Commission (EEOC) released breakdowns of the 89,385 charges of workplace discrimination that the agency received in fiscal year 2015.

EEOC said it resolved 92,641 charges in fiscal year 2015, and secured more than $525 million for victims of discrimination in private sector and state and local government workplaces through voluntary resolutions and litigation.

The year-end data shows that retaliation again was the most frequently filed charge of discrimination, with 39,757 charges, making up 45 percent of all private sector charges filed with EEOC. The fiscal year ran from Oct. 1, 2014, to Sept. 30, 2015. The agency is currently seeking public input on its proposed update of enforcement guidance addressing retaliation and related issues as part of its commitment to inform the public about the EEOC’s interpretation of the law and promote voluntary compliance.

The percentages add up to more than 100 because some charges allege multiple bases.
Charges raising harassment allegations made up nearly 28,000 charges, or 31%. Employees claimed harassment in charges based on race, age, disability, religion, national origin and sex, including sexual orientation and gender identity.

The agency filed 142 merits lawsuits last year, up from 133 the previous year. The majority of the lawsuits filed alleged violations of Title VII of the Civil Rights Act of 1964, followed by suits under the Americans with Disabilities Act (ADA). This included 100 individual lawsuits and 42 lawsuits involving multiple victims of discriminatory policies. EEOC lawyers resolved 155 lawsuits alleging discrimination.

Once way to help deal with Employment Practices claims is to purchase Employment Practices Liability (EPL) Insurance. EPL Covers wrongful acts arising from the employment process. The most frequent types of claims covered under EPL insurance include wrongful termination, discrimination, sexual harassment and retaliation. In addition, the policies cover claims from a variety of other types of inappropriate workplace conduct, including (but not limited to) defamation, invasion of privacy, failure to promote, deprivation of a career opportunity and negligent evaluation. The policy covers directors and officers, management personnel and employees. These types of claims are not covered under a general liability or workers’ compensation insurance policy.

A former employee of a Safeway store in Oregon has filed a lawsuit against the grocery store chain saying she was forced to quit because a customer repeatedly stared at her breasts and made vulgar comments.

A former Safeway employee is suing the grocery chain, claiming sexual harassment by a customer. (The Oregonain/2006)

The Oregonian reported that 44-year-old Daphne Lannan says in a lawsuit filed last week in Multnomah County Circuit Court that she asked managers at the Lebanon Safeway to stop the customer but they did not.

According to the lawsuit, Lannan says a male customer began to comment about the size of her breasts, saying he wanted to touch them. Lannan’s attorney says the law allows employees to sue their employers for sexual harassment by non-employees.

The Takeaway: As an employer, you would need to have an Employment Practices Liability (EPL) Insurance policy to defend a claim of this sort. This isn’t covered by a workers’ compensation insurance policy or general liability policy. EPL provides protection for an employer against claims made by employees, former employees, or potential employees. It covers discrimination (age, sex, race, disability, etc.), wrongful termination of employment, sexual harassment, and other employment-related allegations.

Additional Tip: To avoid gaps in coverage, make sure Third-Party coverage is offered and included by the carrier on your policy. This covers you if a customer or a third-party sues you for discrimination, etc., not just employees. For more information visit: Third-Party Employment Practices Liability Insurance or contact me with questions.

For more on the story: OregonLive.com