Another employee has lost part of a finger at Bimbo Bakeries, a company with plants throughout California whose record of workplace accidents was highlighted by The L.A. Times last year. Bimbo Bakeries USA makes a number of well-known brands of breads, tortillas and pastries, including Orowheat, Tia Rosa and Entenmann’s

The company’s total number of amputations is nine since 2003!

“Nine Bimbo Bakeries workers have had parts of digits or a limb amputated since 2003 at plants across the state, where regulators have found inadequate training and machines without proper guarding.” 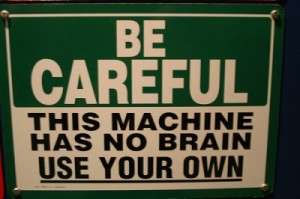 In an investigation last fall, the L.A. Times found that seven employees had lost parts of fingers or a limb in accidents at California plants over the last seven years. In six of those cases, investigators found that machines did not have proper guards to prevent employees from reaching in, officials said.

Then, in January, an employee lost part of his finger in a tortilla machine that investigators later found did not have proper guards.

Inspectors cited “the willful failure of Bimbo Bakeries to guard the openings around … the tortilla production lines” and insufficient training of workers, among other things. The division recommended $123,000 more in fines, including more willful citations. (read full story here)

What Can I do to Keep My Employees Safe?

Jimmy is a California licensed Property & Casualty AND Accident & Health insurance agent working at the ISU - Olson Duncan Insurance brokerage in Torrance, CA. He grew up in Fullerton, CA and graduated from Servite High School in Anaheim and Loyola Marymount University in Los Angeles and currently lives in Tustin, CA. Have questions? Just ask! Or, follow Jim on Twitter at @JimKinmartin
View all posts by Jimmy Kinmartin - Business Insurance & Risk Management Broker »
« Previous post
Next post »